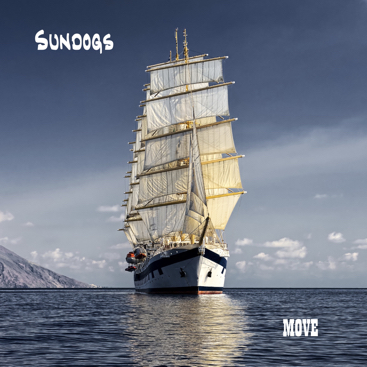 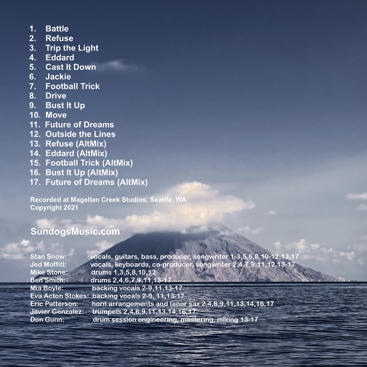 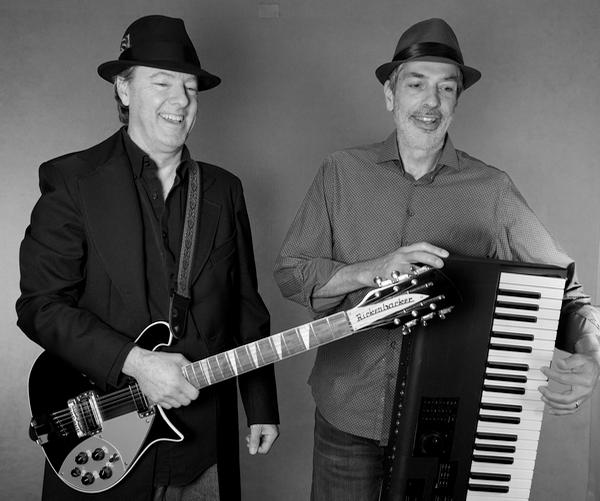 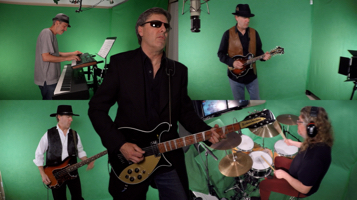 Sundogs will be releasing their fourth album, “Move”, on September 14, 2021. There are 12 new songs plus 5 alternative mixes for a total of 17 tracks.  14 months in the making.  All recording sessions were filmed during production.  Videos will be released in the weeks and months ahead.

“We are excited about this album.   It may be our best work yet!” –  Stan Snow and Jed Moffitt. 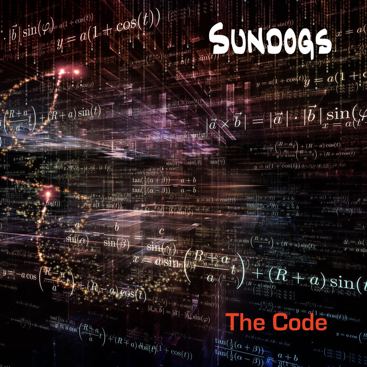 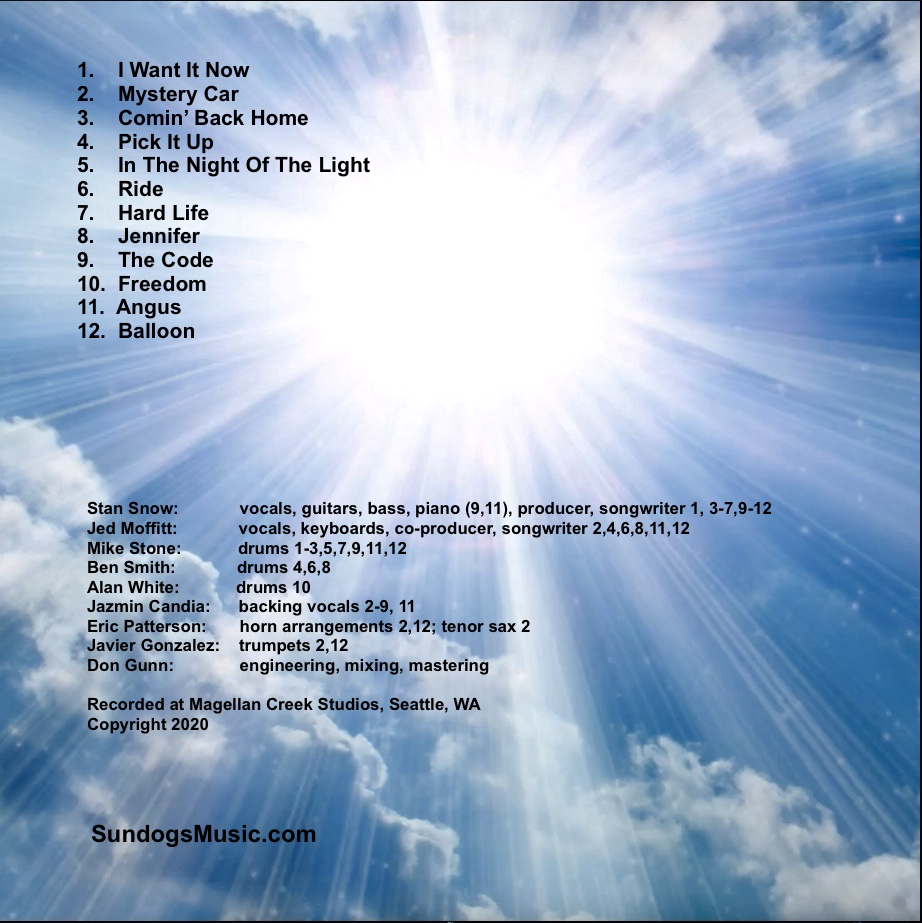 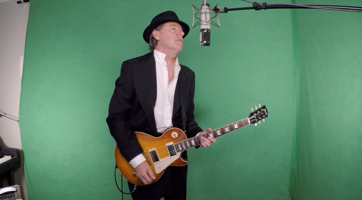 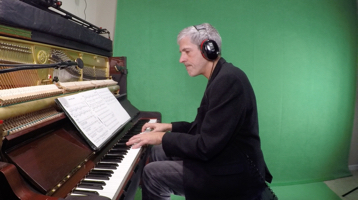 The Sundogs have just released their third album The Code.   The new album includes 12 original songs and performance videos, recorded and filmed in green screen at Magellan Creek Studios in Seattle.

The Sundogs are continuing their tradition of releasing the videos one at a time, and in the sequence of the album.

The Sundogs are at work on their next album. 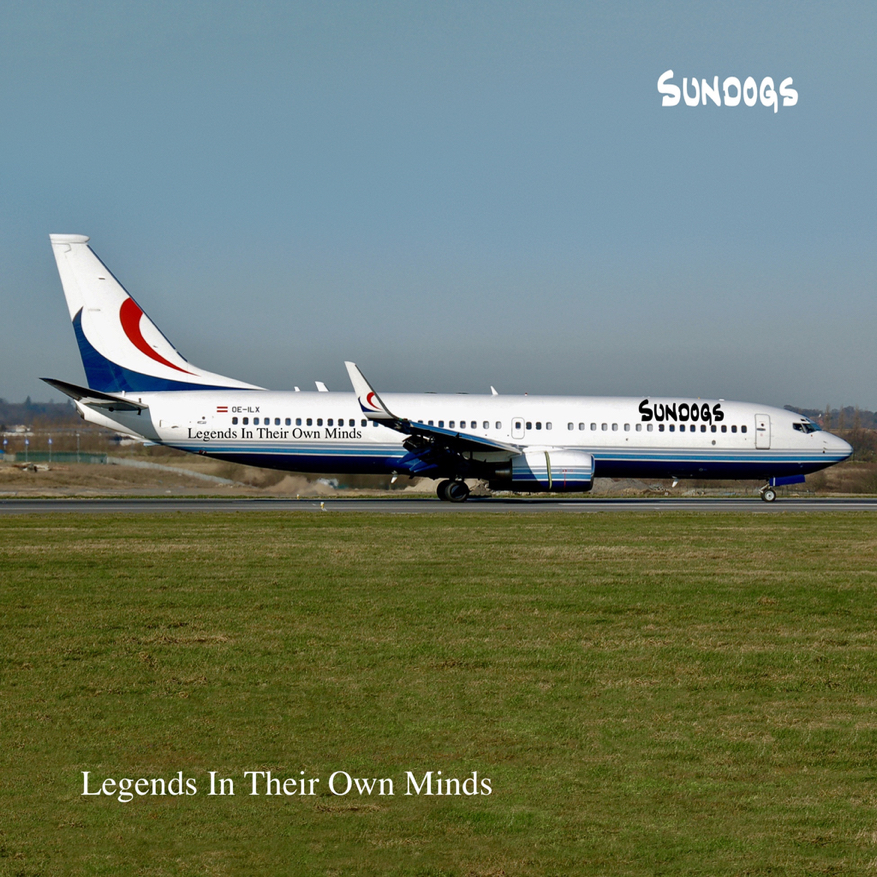 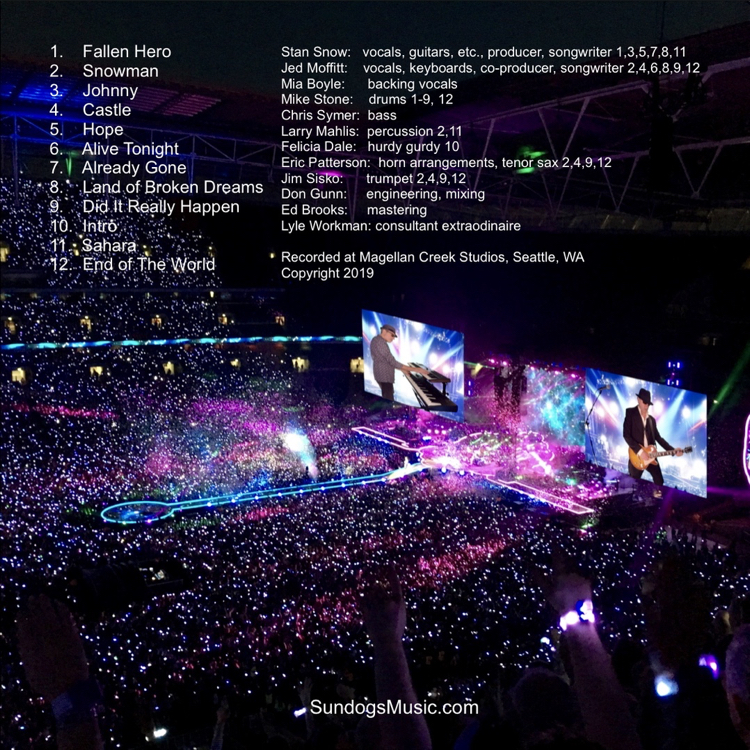 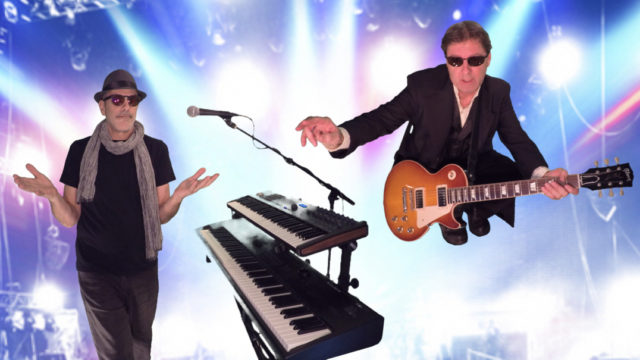 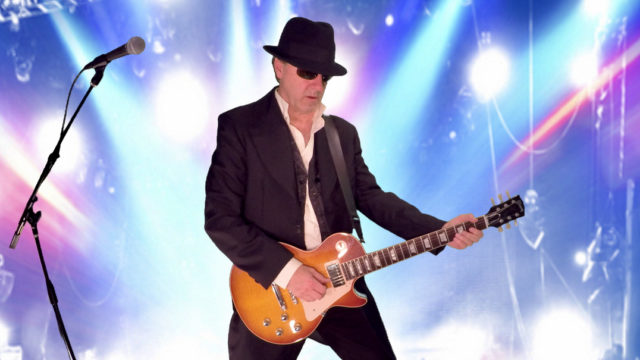 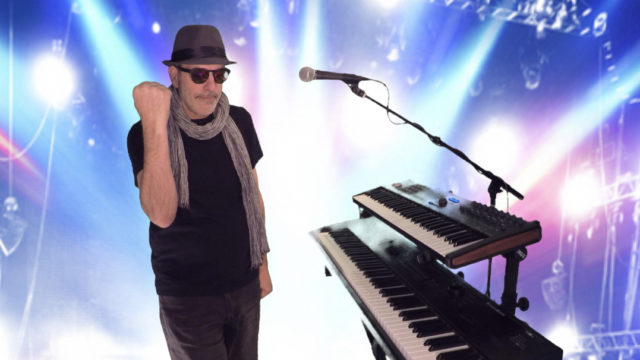 The Sundogs have just released their second album and they are now, officially, “Legends In Their Own Minds”. The cover of the album shows their corporate jet, a Boeing 737, and the back cover has a picture of them performing to a sold out show of an estimated 100,000 people (a record crowd) at Wembley Stadium in London.

How did the concept of “Legends In Their Own Minds” come about?

Snow: “I was driving back from a fly fishing trip with a friend of mine and we were discussing the fact that Jed and I did not intend to go on the road with our band. It would be very expensive and it would take a ton of logistics to put together the kind of live show we would want to do. It would involve roadies, guitar techs, lots of fine musicians, a tour manager, big screens, a tour bus, trailer and/or semi’s, etc., etc… Crazy! It would only make sense if we had huge audiences interested in coming to see us play.

So, we came up with the idea to post a bunch of fake tour dates on our website, and the ‘Legends In Their Own Minds’ idea was born.

Then, we simply expanded on this idea. It’s sort of a Spinal Tap kind of thing. Everyone can participate if they want, in the great self-deception. How much fun is that? Any one of our ‘fans’ can jump on the tour bus with us and have fun being part of the Sundogs – Legends In Their Own Minds – band wagon.

My brother was quick to reflect on the time he saw our show at Winterland, back in the day. Said ‘the Sundogs live show was the best rock concert I have ever seen. Epic!’. Of course, we never played Winterland. And he has swallowed the cool aid, like the rest of us. Ha!! What fun. I love my brother. He has joined us in the mass self-deception.

All that said, the music and the videos are authentic. We wrote and created all of it. 90% of what you see is what you hear. And the only reason it is at 90% is because, for sound quality and proper studio engineering, most of the time we have to separate out the lead vocals from the guitar, or piano, when we are doing both together. But when we shoot the videos for those takes, we are singing and performing with instruments in hand, as we would normally do when performing it live. We are still doing it live, but the audio may be different for the vocal and instrument on those takes.

What has been the focus of the new album?

We are creating original music and videos to satisfy the music fan within. If it sounds good to us, and we like listening to it over and over again, then that is the driving force behind whatever we decide to release. We don’t have to make money at it. We are doing it for the pure joy of it, and because of that, the music and the videos are authentic.

Jed Moffitt said “once we started focusing on ‘satisfying the fan within’, all decisions became really easy. We write, record, produce and shoot videos during the recording sessions, in green screen, so that people can join in on the fun we are having creating this stuff. It’s not for everyone, but what music ever is?

Everyone has different tastes, and we can’t second guess what people are going to like. We have to write and create music from the heart. If we like it, and it passes our tests for whatever it is that we think is worthwhile at the time, then maybe others will like it too.”

How did you guys learn how to do all this stuff?

Both Jed and I have been friends and have played music together since we were in a band, and on the road, when we were 19 years old. Ever since I was in my mid 20’s I had a home recording studio. And 3 years ago, I retired from commercial real estate and began to get back into the music. I rebuilt the studio, learned how to use video editing software, re-studied production, learned how to build a website, learned how to use social media marketing, etc., etc.….

Last year we purchased a ‘real’ drum kit and set it up with the help of Don Gunn. Lyle Workman, a good friend of mine, and a world class guitarist / composer (Sting, Todd Rundgren, Beck) helped us pick out the perfect drum kit and all the best mics for recording it. Lyle connected us with Don Gunn and Mike Stone via Matt Chamberlain in LA. These guys were amazing in helping us to get this album done. They definitely gave us a leg up on things.

It was recorded using Logic Pro X software, not Pro Tools. And at one point I flew to LA, with my computer, to Lyle Workman’s house, so he could show me how to mix the new drum kit, the way he did it, but on my computer, with my plugins so I could dial it in. Lyle has worked with some of the worlds best drummers, including Vinnie Colaiuta, Abe Laboriel Jr., Simon Phillips, Matt Chamberlain, etc…

I could go on and on about the fabulous people we worked with, and the process, but that will be too much to go into here. There is more info posted on our website and in the ‘liner notes’ with credits for each song. SundogsMusic.com

So what is next for the Sundogs?

Well, we are just now starting to lauch our marketing efforts for the new album. This phase is really fun, because we get to interact with people who enjoy our music and videos. We’ll be doing some Social Media marketing to promote our stuff. It’s all good.

Once we get through the next several months of marketing, we will begin work on the next album. Jed is already writing tunes for it. I will do so, as well, but need to finish the production of the rest of the videos. Each video takes about 20-30 hours, or more, to produce. With 11 songs, you can do the math. It’s a ton of work, but worth it. I mean, how many bands do you know release a video album these days? All shot in green screen, with authentic performances, what you see is what you hear? I can’t think of anyone who’s doing this. It’s crazy!

And as we continue down the path of being crazy, and being ‘Legends’, we have a responsibility to document our travels:

• Could the Sundogs be on the Tonight Show someday? Maybe.
• Would it be photo-shopped? Maybe.
• Could they meet with the Dali Lama? It’s possible.
• Could there be a blog about the trials and tribulations of the road? Definitely.

Jed and I often say one word when we are getting ready to move on to the next adventure…..

It’s a throwback to the old west. Bring up the horses and let’s ride!!

There is work to do, new music to create, new videos to shoot, new horizons to experience, and more fun that we deserve while we travel this road together. We are like pigs in mud, living the dream, and we get to share it with anyone who is like-minded in terms of their musical tastes and visions for glory in the music business.

For us, it couldn’t be any better. And for that, we are grateful.

For more information and links to all things Sundogs, please visit: SundogsMusic.com

The information supplied herein is from sources we deem reliable, however some of it is fake news that is intentionally designed to poke fun at, jest, snipe and/or provide humor about the fact that the Sundogs are “legends in their own minds”. It is provided without any representations, warranty or guarantee, expressed or implied as to its accuracy. Prospective viewers, listeners, readers and/or purchasers should conduct an independent investigation and verification of all matters deemed to be material, including, but not limited to, statements that may be unrealistic and/or false. CONSULT YOUR ATTORNEY, ACCOUNTANT, OR OTHER PROFESSIONAL ADVISOR.